Review of LIMELIGHT by Emily Organ 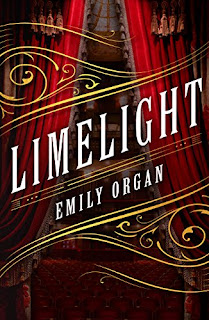 How did an actress die twice?
London, 1883. Actress Lizzie Dixie drowned in the River Thames,
so how was she murdered five years laterin Highgate Cemetery?
Intrepid Fleet Street reporter Penny Green was a friend of Lizzie’s and
Scotland Yard needs her help. Does Penny unwittingly hold clues to
Lizzie’s mysterious death? Penny must work with Inspector James
Blakely to investigate the worlds of theatre, showmen and politicians in
search of the truth.
But who is following her? And who is
sending her threatening letters?
Penny is about to discover that Lizzie’s life was more complicated,
and dangerous, than she could ever have imagined.
If you like a murder mystery then you'll love
this atmospheric Victorian mystery by Emily Organ.

Uh oh! Actress Lizzie Dixie’s managed to get herself killed—twice. She was drowned in the Thames River the first time, and now she’s been found shot dead in Highgate Cemetery. It’s quite a feat, but no worries. Intrepid street reporter Penny Green is hot on the trail of untangling the mystery of Lizzie’s hidden lives and buried secrets. Penny Green being on the case is a miracle at all because: (1) it’s 1883 and women don’t solve murders; (2) Penelope has already been fired for publicly disagreeing with the police; and (3) it’s 1883 and women don’t solve murders! But there she goes, helping Inspector James Blakely and noticing he’s kinda cute in every kinda way. Is it wrong to notice? Not when a book is this delightful!

What can I say? LIMELIGHT is the first entry in the PENNY GREEN MYSTERIES and I’m HOOKED! Intriguing story, compelling writing, fantastic characters are all there to entice you to follow along. It’s a must read for any detective fan, especially since Ms. Organ pays such meticulous attention to historical detail. I admire authors who can pull this off, and would liken her to Anne Perry in this regard. They both include the customs and mores of the time, and it’s downright fascinating. It's especially true when the stories document the way pioneers, represented by Ms. Penelope Green, helped pave the way for later generations of females wishing to spread their wings.

The pacing is more than good, and the storytelling superb. I loved Penny Green in all her feistiness. There’s an elegance and charm, and I do wonder if she’ll ever become closer to the equally charming Inspector Blakely. They would make such a lovely couple, going through life solving mysteries, and raising eyebrows at the same time.

Definitely download yourself a copy and see what the buzz is about. This is one I can highly recommend! 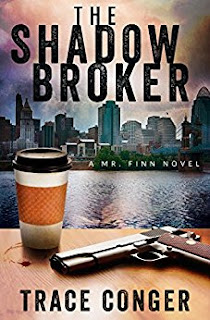 - WINNER of the the 2015 Shamus Award for Best Indie P.I. Novel --
When finding criminals is your business, it’s easy to make a killing.

Finn Harding (Mr. Finn to his clients) specializes in finding people who don’t want to be found. Stripped of his PI license, Finn begins working for the type of clientele who operate in the shadows, pay in cash, and don’t care if he’s licensed or not. As Finn becomes ensnared in a plot to take over a black market information brokerage, he finds himself and his family straddling the thin line between life and death. With his own clients gunning for him, Finn must evade a psychopathic killer, special agents from the FBI’s cybercrime unit, and a Detroit mob boss. He’s about to find out that working with criminals has its advantages. Staying alive isn’t one of them.

In The Shadow Broker, Trace Conger delivers a sharp-edged and gritty tale of crime, murder, and family. It’s a fast-paced crime thriller that holds nothing back.

Finn Harding is one of those people … you know the ones … edgy, seemingly living on adrenaline … they’re nice enough, but you know there’s something dangerous lurking behind those eyes. You ask yourself, “What has this guy gotten himself into this time?” But you don’t dare ask because he’d only lie. And even if he wanted to tell the truth, how would he explain a simple case of tracking down a blackmailer escalating to murder, an ultimatum from the FBI, his father being thrown out of a nursing home, and, oh, yeah, meeting Little Freddie, a hired gun that likes to disassemble people?

Can I tell you that I LOVED The Shadow Broker by Trace Congers! It’s flat out a great read on all levels! The plot is like AMAZING. Ditto the writing. The characters are some of the biggest scumbags you’d ever not want to meet. But do they deserve their cringe-worthy fates? I’ll leave it to greater minds to figure that one out. All I know is that what happens to these scum suckers is WILDLY entertaining!

I ZOOMED through this book! The story is that good. This book deserves every freakin’ five star review received including the one I’m about to give it. There are no downsides to it—only good sides that speed along and get more and more entangled as they bounce along in a very unpredictable fashion!

Buy it, you’ll thank me … you’ll thank yourself … and Trace Congers, of course! Thanks, Mr. Congers! You kept me thoroughly entertained!

a Rafflecopter giveaway
Posted by Unknown at 5:45 AM No comments: