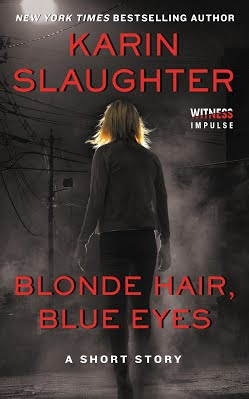 A beautiful young girl was walking down the street―when suddenly
Julia Carroll knows that too many stories start that way. Beautiful, intelligent, a nineteen-year-old college freshman, she should be carefree. But instead she is frightened. Because girls are disappearing.
A fellow student, Beatrice Oliver, is missing. A homeless woman called Mona-No-Name is missing. Both taken off the street. Both gone without a trace.
Julia is determined to find out the reasons behind their disappearances. And she doesn't want to be next…
Michael Connelly calls Karin Slaughter "unrivaled among thriller writers." This gripping, unforgettable short story proves why.
And be sure to order Karin's new novel,
Pretty Girls, on sale September 29, 2015.

Can You Ever Be Too Paranoid? Evidently, not!
Julia Carroll finally has an official boyfriend, and losing her virginity has never seemed so attainable. But then a missing coed happens, and Beatrice Oliver’s description matches Julia’s to a T. Nineteen, beautiful, with blonde hair and blue eyes, is it a mere coincidence that the girls have this much in common? Or is something more sinister afoot? Julia is determined to find out and pitches doing a story on Oliver to her school paper, but her superiors wonder whether covering the details of this one insignificant statistic is even worth the bother. Julia thinks it is, but then she’s taking this disappearance personally. Too personally? That’s what we turn the pages to find out.
Karin Slaughter has a winning way with putting her touch on complex subject matter, and sexual crimes against women are that, but it all works in this smart little twister of a tale. Her choice in making Julia a journalism student is a good one. It allows for plenty of opportunity for venting perspectives on this charged topic.
I especially loved the way Ms. Slaughter uses Julia’s daily schedule to slide in all the times women suppress their instincts about acting on unwelcomed sexual advances. While there are different reasons for not shouting, “Get your filthy hands off me!” the idea that it’s commonplace for females to subjugate what’s in their own best interests sets up an interesting dynamic when juxtapositioned against a sexual assault. For instance, does Julia’s constantly talking herself out of being proactive about implied threats lead to nurturing a submissive attitude? And is a submissive attitude needed when one finds themselves in danger? It’s an extremely clever observation and leads to some pretty awesome layering of emotions and psychology in how a person will react to a given situation.
Yes, there is all that, but rest assured, at its heart, Blonde Hair, Blue Eyes is a fast-paced, downright creepy thriller. And because of the fleshing out of these characters, we are right there with Julia in being suspicious of every acquaintance and situation she encounters. The tension is ratcheted up high and every squeak of a rubber-soled sneaker on a tiled floor will have you jumping. Guaranteed that you’ll have a hard time putting this one down. 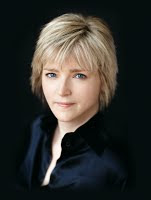 Karin Slaughter is the #1 internationally bestselling author of more than a dozen novels, including the Will Trent and Grant County series and the instant New York Times bestseller Cop Town. There are more than 35 million copies of her books in print around the world.

Posted by Unknown at 5:02 AM No comments:

REVIEW OF THE BROTHERHOOD: Daithi Kavanagh

THE BROTHERHOOD
by Daithi Kavanagh 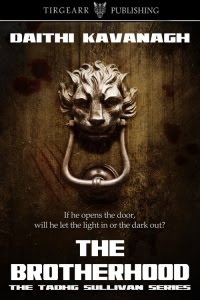 EXCERPT
She knew nothing of the white van that pulled up behind her, until the two men grabbed her and bundled her into the back. She’d been jogging along the road, with her headphones on listening to Mumford and Sons. At first she’d thought it was a prank by some of her friends. But as the van tore along the narrow road at top speed and she found herself being tossed from side to side, she knew something much more sinister was unfolding. She screamed. Suddenly the van took a sharp left, and she smashed her face against the side panelling. They seemed to be on a long, pebbled lane. She stared at her headphones, the music still blaring, lying on the floor, and cursed herself for not listening to her parents, who had begged her to bring her mobile phone.
The van jolted to a halt. She heard men get out, heard their feet crunch on the pebble drive as they walked to the back and opened the doors. She cried with terror as the two middle aged men dragged her out and carried her across the forecourt towards a huge wooden door. One rang the bell, and seconds later she heard the door creak as it inched open. A tall man of about sixty with a nose like a beak moved to the side as the men carried her inside and along a dark hallway. She tried to struggle but to no avail. They were too strong. She screamed, but her voice seemed to be swallowed by the old house.
When they reached the back, they made her stand. She begged them to let her go home. Tears ran down her face when they ignored her pleas, opened another door, and pushed her through. She found herself in an old church. They prodded her along the aisle towards an altar. One went over to the wall and pulled down a handle disguised as a candlestick. The altar started to move slowly, revealing a stairway leading down into a dungeon. The two men propelled her into the dark hole below. The altar moved back slowly. She tried to climb the stairs, but the men forced her back down. She screamed one last time. Then the darkness surrounded her, as the marble altar ground itself into place, eventually drowning out her pleas.
REVIEW
A young girl is kidnapped during a morning jog and it falls on Tadhg Sullivan to find her. Tadhg has recently relocated from Dublin to Clare after falling out with the Minister for Justice and the Garda Commissioner. He’s also lost his life partner Helen Carty. She’s unable to put up with his bouts with depression and alcohol, but Sullivan shoulders the responsibility and dives in. The scope of the case soon widens as a sadistic cult is suspected. It’s no longer a one man job, and so Sullivan must reach out and place his trust in an IRA leader and ex-CIA agent to find out who is behind THE BROTHERHOOD.
The premise for THE BROTHERHOOD is quite good as is the story. The book is fast-paced and includes some graphic depictions of violence. The lead protagonist Tadhg Sullivan was extremely likable, and I enjoyed his staying one step of the enemies trying to bring him down. However, I did have some problems with this book.
The first was Mr. Kavanagh’s penchant for telegraphing what would happen. Pretty much in every climactic scene, Sullivan would explain beforehand what his plan was. It pretty much ruined the suspense. Yes, there was some tension wondering if the plan would work, but keeping these things under wraps and letting us discover what would happen might have worked better. Mr. Kavanagh might have actually gotten us to believe that Tadhg was working for the other side or had sold out if he had held back these details. The second thing that bothered me was the style of writing. It was all telling and not enough showing. Everything was pretty much, “He picked up the gun and pointed it at her,” or “She sat in the booth and drank her wine.” There was no showing us how the gun felt, if it was heavy and if the woman’s drink was chilled.
Other than that, I felt the story hung together quite nicely. If you’re the type that's into conspiracies and secret societies, this definitely might interest you. The sequencing of events was good as was the inclusion of the IRA leader Rory O’Connor. I especially liked this character as it added a level of wondering exactly what is good or evil, and whether fighting for a cause we believe in justifies the means.
I can recommend the book for those liking an action-driven thrilling adventure that is replete with political intrigue and forces that are sometimes beyond our control. My final score: 3.6.
AUTHOR BIO 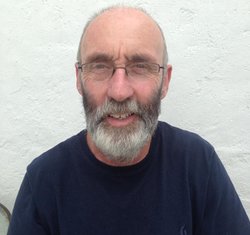 Daithi Kavanagh is 57 years old and lives with his wife and two teenage children in Trinity, Wexford, Ireland. Up to 2012 when the recession hit Ireland he was making a living as a musician. He then went back to adult education and completed his Leaving Certificate in 2014. He is now studying for a degree in Irish Culture and Heritage Studies at Wexford Campus.
While he was studying he began writing ‘The Gun’ which is the first book in The Tadhg Sullivan Series.  His second book in the series called The Brotherhood was released in May 2015. He is currently working on the third book in the series.
He plays guitar and sings in many of the pubs in his hometown of Wexford where he is often joined by his two children Ella and Rory who play fiddle and flute.
In his spare time he likes to walk his two dogs with his wife Caroline.

Detective Tadhg Sullivan’s life seems to be falling apart, since being shifted to Clare
from Dublin after falling out with the Minister for Justice and the Garda Commissioner. His partner, Journalist Helen Carty, has moved out, unable to live with his bouts of depression and periodic alcoholism. He finds himself once again alone in a world that doesn’t understand him.
Suddenly Sullivan is knocked out of his lethargy when a teenage girl goes missing not far from Ennis where he has been stationed. Sullivan is asked to lead the hunt by the local Superintendent and is catapulted into a world of unimaginable horror. He is confronted by Lord Charles Cromwell the leader of a sadistic cult —The Brotherhood—that derives its pleasures from the torture and murder of young women.
Sullivan’s investigation is once again hampered by political interference. As he fights his way through one bureaucratic obstacle after another he discovers that The Brotherhoods tentacles have not only reached into corridors of power in Ireland but, they are being protected by powerful politicians worldwide. To cut through this protective ring of steel Sullivan finds himself having to engage with some strange bed fellows. Which included an ex CIA agent, Simon Horowitz, who had saved his partners life during his last investigation and an IRA leader, Rory O’Connor, who has recently been released from prison.
Will this strange combination be able to destroy The Brotherhood before their murderous reign takes another young life or will Lord Cromwell destroy Sullivan and everything he loves?