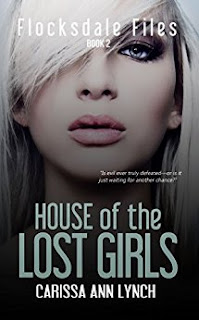 A Wild Rush of a Great Story!!!

Marianna Bertagnoli is so not thrilled at her mom and stepdad for moving to Flocksdale—and she’s even less so when she arrives. The expletive painted on the welcoming sign tells her all she needs to know, but her parents don’t seem to get the not so subtle hint. The town sucks and even the uber cute guy at the bookstore can’t make the bad go away. Especially when one of the books she purchases in that store chronicles the history of the town where young girls died in all sorts of horrible ways. It isn’t long before history repeats itself, only this time Marianna finds herself at the center of the madness.

Wham! Bang! Whoosh!!! If you like your books fast and suspenseful , you’ll go bonkers for HOUSE OF THE LOST GIRLS by Carissa Ann Lynch. The creepy vibe is established immediately … and the tension? It only gets worse! I was a nervous wreck reading this and found myself screaming at Marianna to get out of the house and Flocksdale so many times, but did she listen? Ha! Characters in books are about as bad at taking advice as those in movies!!!

In case it isn’t apparent from the enthusiasm, I LOVED this story so much!!! Carissa Ann Lynch’s writing is stupendous and doesn’t let up … I mean, never ever! Ms. Lynch is what so many other authors aspire to be! She gets that proper grammar is important, but that storytelling supersedes everything, and that’s what she is, a brilliant storyteller! She does a masterful job of pulling us in and keeping us hanging on her every word. Her writing is positively ADDICTIVE and I kept turning pages and reading, and reading and whimpering, and reading and screaming!!! It was all so darn enjoyable and I had to get to the end to see how this all finished.

The FLOCKSDALE FILES series is amazing—and it keeps getting better. That’s saying something because the first book was good—very good. Carissa Ann Lynch really has a winner here. The heart of the story is something that we want to read about, and the characters she comes up with are downright fascinating—enough to become obsessed with … like Marianna. Marianna is so likable and so over her head in danger that it’s ridiculous, but she persists, getting herself in deeper and deeper … and we go along with her … carrying her baggage for her … and trying to tell her who to trust, but guess what? We don’t know either!!!

This is the ultimate fun, creepy, scary book! There are so many surprises that I guarantee you won’t figure this one out. You know FOX’s SCREAM QUEENS? You know THE HILLS HAVE EYES? Well, combine those two, put the result on steroids inject it with some amphetamines and you’ve got HOUSE OF LOST GIRLS.

Yeah, baby! I’m giving this one some serious stars!!!

Posted by Unknown at 5:47 AM No comments: 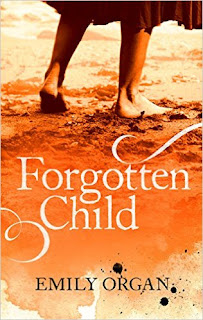 A casket hidden under the floorboards of Alice Wescott’s home was stolen.  What it contained and what it was doing there is a secret that her husband took to the grave, but several years later, after the initial theft, an uninvited intruder shows up looking for it. Now two people are dead and Alice is left to grapple with the reason for her husband’s actions in hiding it in the first place. It’s a lot to handle, especially when an acquaintance begs Alice to look into the death of her son. Killed in an alleyway and left to bleed to death, are the threats Alice is receiving connected to the casket? The young man’s murder? Or to both? Although secrets may be buried, they never remain that way for long. Especially not when a determined young woman decides to solve the mystery of what is going on.

FORGOTTEN CHILD by Emily Organ is a WOW!!! It’s the 2nd book in the RUNAWAY GIRL SERIES and this entry overflows with thrills, chills, romance, and adventure! It’s everything a reader asks from a novel—and more.

The writing in this outing is again superb. There’s a surety that sweeps us up and carries us along. The first chapter is yet one example of how effective it can be. I simply love the way it’s written. The pacing is wonderful, the atmosphere thick with peril, and the setting beautifully described. I should add that the story never slows down. I was held captive by the inventiveness of the tale and by the suspense that never wavers. Danger abounds so beware of who you trust!

While our old favorite characters return, there are lots of new introductions to be made. And don’t worry, Ms. Organ has taken care to bring each one to life. We know their idiosyncrasies as well as their hopes and dreams. There’s a fullness achieved—one that’s complete. It’s much the same as with the story itself. The fleshing out and complexity of detail is so appreciated, as is the very well-placed humor sprinkled about. It breaks up the tension and adds just the right note of levity—and sometimes sarcasm.

The romance between Alice and Jon is lovingly told. There’s a subtlety and deft hand used in letting us peek at their inner thoughts, hopes, and fears. The relationship between Alessandro and his uncle is another. It’s a brutal example of the extremes presented in this story that hits its mark and leaves us breathless.

Ms. Organ has outdone herself and that’s great for us. Is there anything better than a huge delicious novel to sink into at the end of a long day? I think not and she’s delivered on presenting just that. I’d also like to mention that although FORGOTTEN CHILD can be read as a standalone, I urge you to read the series in succession so you catch all the intricacies in terms of how these characters evolve. You’re only going to pick up RUNAWAY GIRL anyway, so you might as well do it right the first time around!

FORGOTTEN CHILD is a sweeping, expansive, whopper of a tale and earns five stars from me! If you’re at all into mystery, suspense, or adventure, do yourself a favor a pick up a copy today! I heartily recommend this series! It’s shaping up to be lovely … just lovely!

Posted by Unknown at 5:19 AM No comments: