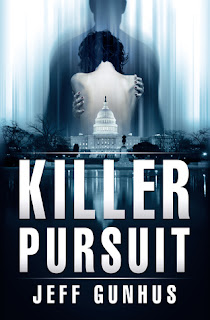 When a high-society call girl is murdered in her Georgetown home, investigators find two cameras hidden in the walls of her bedroom. One has its memory erased, presumably by the murderer. The second is connected to the Internet through an encrypted connection…and no-one knows who’s on the other end.
Special Agent Allison McNeil is asked by beleaguered FBI Director Clarence Mason to run an off-the-record investigation of the murder. The most direct path to apprehending the killer is to find the videos, but with rumors that the victim’s client list may have included Mason’s political enemies, Allison worries about the director’s motives. As she starts her investigation, she quickly discovers that she’s not the only one pursuing the videos. In fact, the most aggressive person racing against her might be the murderer himself.
REVIEW
Gripping, Taut, Suspenseful … A Fabulous Read
Uh oh, a high-priced DC call girl has gotten herself killed.  Little did her clients know that she was trying to feather her retirement nest egg by videotaping her encounters with customers—customers that included some pretty well-known politicians. In fact, one is on the fast-track to become president. A scandal could ruin him and those pesky tapes have disappeared. He launches a search, but he has stiff competition. The Director of the FBI wants those recordings for himself. He considers them job security, but who should he call for help in securing the prize? Why Alison McNeil, of course.
This is the premise of Jeff Gunhus’ KILLER PURSUIT. It’s a pretty fabulous suspense thriller that is long on action and tangled webs that scumbag politicos leave as a calling card and short on … nothing, really. It’s all there. In fact, there isn’t much negative to say except a slight continuity problem. Things like that drive me crazy because I have to leaf back through the book to make sure I’m remembering things correctly.
Other than that hiccup, the book is exceedingly well-written, the plot tight, and the tension high. It’s one of those fast reads for all those reasons and more. I’d also like to give a nod to the complexity of the plot.  I love when a book has multiple storylines going on, and this one does. I also very much liked the protagonist of Alison McNeil. Gunhus supplies her with a sympathetic backstory that explains a lot of trust and anger management issues. I adored the relationship she shares with her dad. Loved those scenes they spent together so much. As for her investigative skills, for me, Alison does some really foolish things. I don’t mind a character being hardheaded, but being stupid is ridiculous.  She teeters on the borderline separating the two, and once in a while her foot slips across that line. I forgave the missteps because she is nicely fleshed out.
I definitely recommend KILLER PURSUIT to those that like action-driven offerings that keep you on your toes. If you’re into political thrillers, then it’s even more reason for you to read. Mr. Gunhus has a unique voice, and one that’s worth hearing. I’m giving this one four stars for a job well done.
AUTHOR BIO
Jeff Gunhus is the author of thriller and horror novels for adults and the middle grade/YA series, The Templar Chronicles. The first book, Jack Templar Monster Hunter, was written in an effort to get his reluctant reader eleven-year old son excited about reading. It worked and a new series was born. His books for adults have reached the Top 100 on Amazon and have been Foreword Reviews Book of the Year Finalists.
After his experience with his son, he is passionate about helping parents reach young reluctant readers and is active in child literacy issues. As a father of five, he leads an active lifestyle in Maryland with his wife Nicole by trying to constantly keep up with their kids. In rare moments of quiet, he can be found in the back of the City Dock Cafe in Annapolis working on his next novel.
Author links:
http://www.jeffgunhus.com/
https://www.goodreads.com/author/show/963702.Jeff_Gunhus
https://www.facebook.com/jeffgunhusauthor
https://twitter.com/jeffgunhus